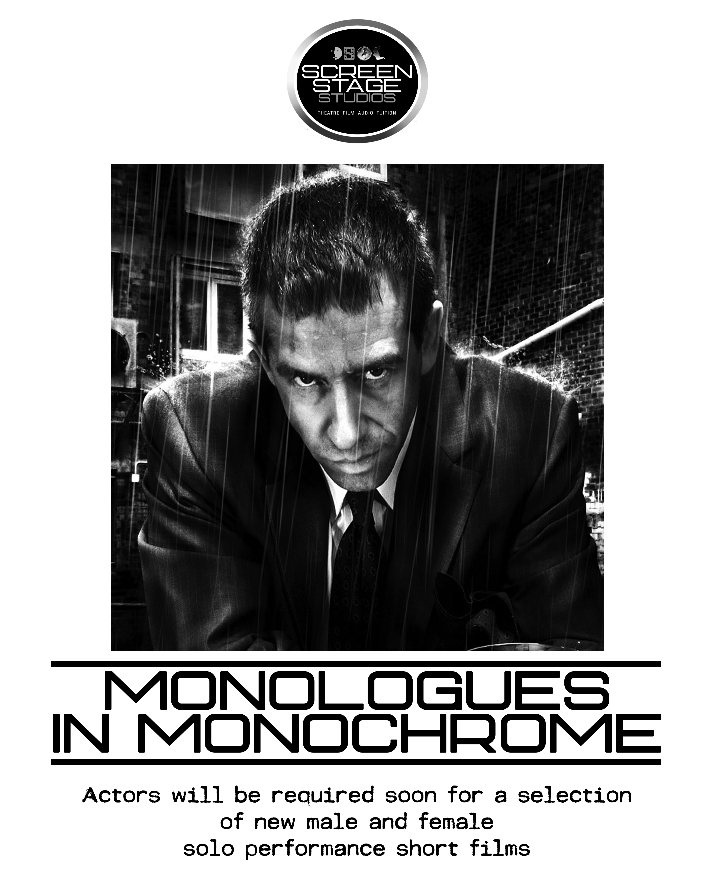 If you're interested in performing one of these monologues - please tell us why - and convince us that you'd be ideal for the role. Send your CV, details on where you studied acting, a list of acting work you've completed and a link to your showreel, together with a recent head shot.
email@screenstage.net
ADMISSION - Marlina recalls a major event in her earlier life and has decided now is the time it was dealt with.
GRIEF - A relatively young man has lost his beloved wife at childbirth along with the child he craved. This is how he is coping with the overwhelming trauma of bereavement. (NOW CAST)
THEM ZEALOTS - A hard-nosed London geezer lets rip on all things almighty - and the world's religions - all of which are getting on his proverbial wick.
MONOLOGUES IN MONOCHROME
A selection of new contemporary solo pieces for performance on film by accomplished male and female actors of varying ages.
Please only apply for audition if you are genuinely talented and experienced with a definitive ability to credibly portray a character on camera.
Once completed - these monologues will be edited together and shown online before submission to a series of Short-Film Festivals as soon as current health issues and conditions allow.
-------------------------------------------------------------------------------------------------------
JOOLS MINUS JEFF - A young woman whose previous relationship has ended, is surprised to receive a call from her ex, who is clearly keen on reviving things between them. She tells him over the phone, her adamant reasons why this will not be happening.
THIS MORTAL COIL - Two linked monologues. The first is 'Donald Jarvis' - a younger man, who is sadly aware of the imminent demise of his mentor as he outlines the wonderful eccentricities of 'Bertie McKendrick' - an older man, suffering from a terminal illness, and who offers the second monologue, from his wheelchair.
• If any suitable female actors express interest, the genders of either or both characters may be altered to suit.
ACT OF CONTRITION - A woman enters a confessional booth in an RC church and begins a heartfelt diatribe which concludes with a shocking revelation.
FERAL - This is an 'action' monologue which will require a female actor of considerable physical flair in addition to verbal accuity. Mercer is a fiercely intelligent young woman, highly skilled in combat, physically fit, supremely alert and in possession of little or no tolerance for anything or anyone that or who conflicts with her views.
GETTING BY - Jim McMenemy is an unemployed Glasgow man, who struggles to maintain some form of occupied existence by writing notes on other individuals, some of whom are/were colourful characters from within his neighbourhood.
NO LONGER IN - Mick is in a band, loves football - and has finally come to terms with the fact that he is gay. He has no interest in the camp and overtly flamboyant behaviours of other men with a similar sexual stance, and in this monologue he expresses his thoughts for the future.
--- MORE TO FOLLOW SOON