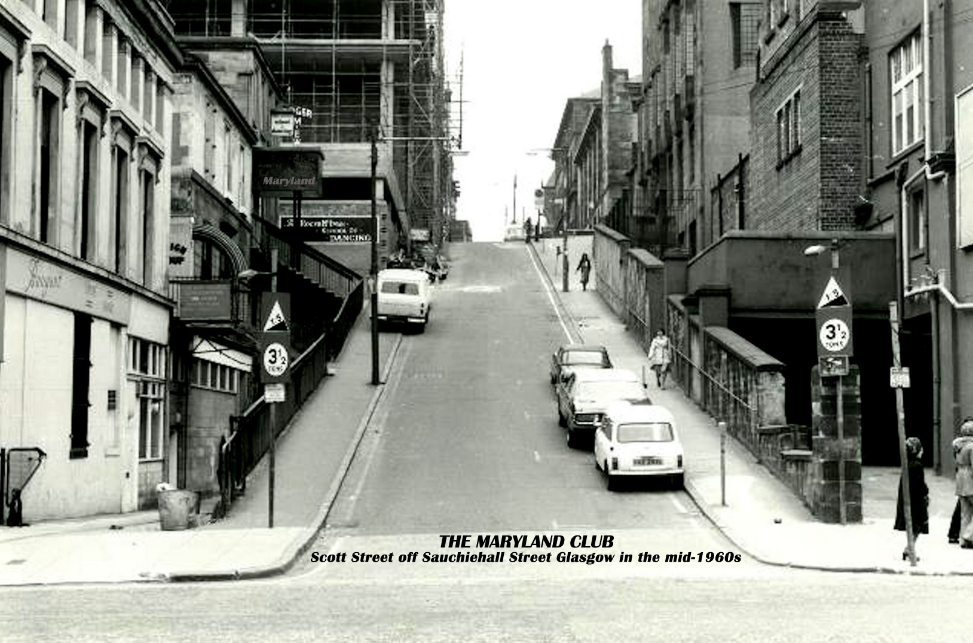 The Maryland Club
Bob Gardner and Willie Cuthbertson, the co-owners  of the Maryland Club in Glasgow's Scott Street and were very keen on promoting live music. The Maryland started life as a trad jazz club in the early 60s. The club got its name from a song written by James Ryder Randall ‘Maryland, my Maryland’ as it was a personal favourite of Bob Gardner.  The Maryland ran gigs on Wednesday, Friday and Saturday evenings, some Sunday afternoons and occasionally Sunday evenings. The admission price ranged from twelve shillings (60p) to fifteen shillings (75p). It wasn’t licensed, but that wasn't unusual at the time — the Electric Garden in Sauchiehall Street (now the Garage) didn’t have a licence either. Dope smoking did go on but it wasn’t encouraged, acid was dropped and occasionally a punter might freak out. The Maryland promoted emerging talent and you knew you’d see talented musicians.

Several Scottish bands played during the sixties, including The Beatstalkers, Studio Six, Dream Police and Dean Ford and the Gaylords (who went on to become Marmalade). TV programmes like Ready Steady Go, Juke Box Jury and of course Radio Luxembourg popularised soul and blues, which was embraced by British artists — Amen Corner, Jimmy James and the Vagabonds, Geno Washington and the Ram Jam Band, who all played the club. From 1969 the demographic changed and the emphasis was on blues, blues-rock, folk-rock and jazz-rock. Scottish bands included Writing on the Wall, Beggars Opera, Crusade, East West, 1500 Flying Hours and Aegis. The biggest crowds were for Muddy Waters and Tony Williams’ Lifetime. Muddy Waters appeared with his full Chicago Blues Band two nights in a row. Jack Bruce was the bassist in Lifetime.

< THE MARYLAND: A SHORT DOCUMENTARY
Presented by Thom McKeown