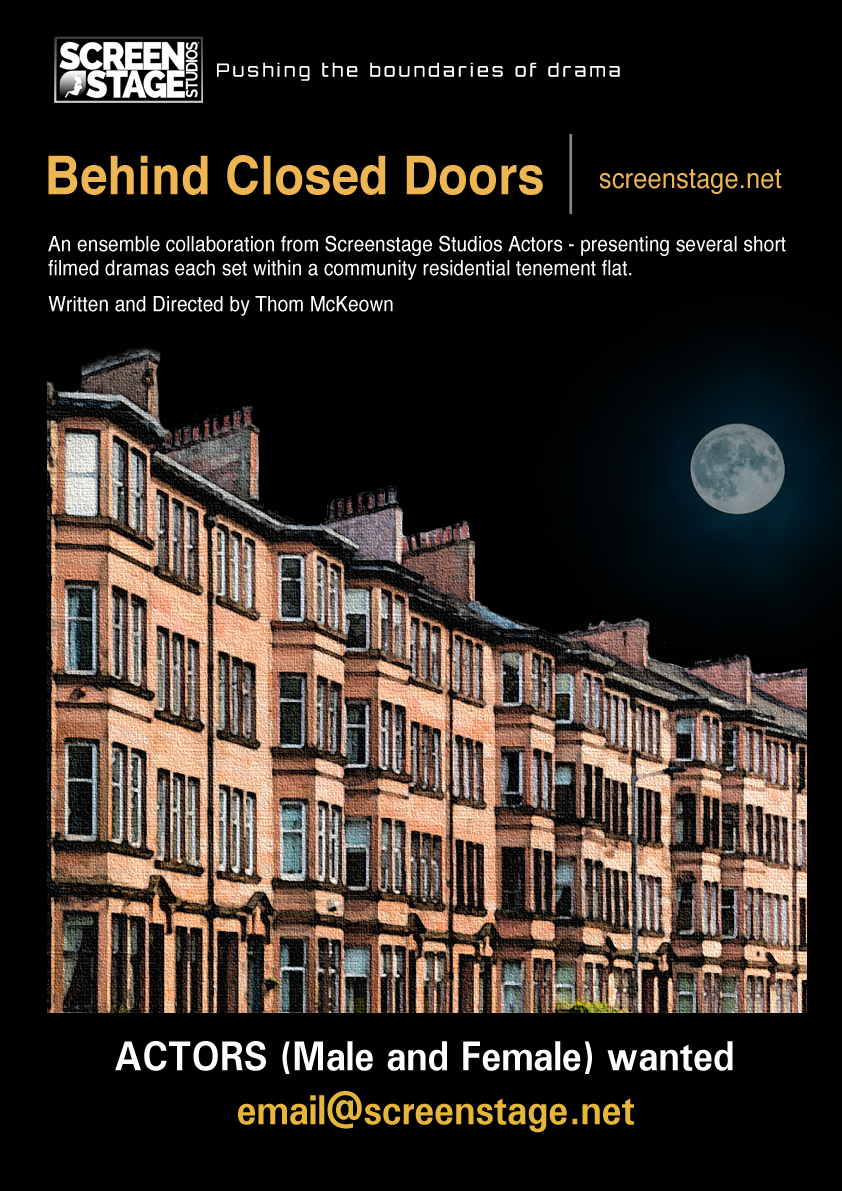 This will feature several short films all set within flats in a tenement building. If any of the following appeal to you as an actor and you would like apply for an audition, please get in touch initially by email with recent headshots, a full CV and a link to your showreel.

Auditions will begin in November 2018

ALL ALONE (Monologue, Female) Subject: Loneliness. A middle-aged woman talks about her life and the what happened following her recent marriage.

FEMME FOR ALL (Monologue, Female) Subject: The widespread prevalence of sexual assault and harassment is featured within this powerful piece.

GOING STRAIGHT (Three Male, One Female) Subject: Heterophobia. A male married couple are astounded by the news that their son has declared himself straight - and will be marrying a woman

HAPPY FAMILY (Two Female, One Male Daughter/Mother/Father) A mother and her daughter are in their flat. A pair of men’s legs in trousers and boots are showing under a sofa – he’s not moving. A conversation begins between the two females. Daughter is young teenage and naively flirty in dress and tone which upsets her Mother.

NOT A BABY, A MAYBE (Monologue, Female) A young  single woman is pregnant but naïve – as she verbalised her feelings on the situation.

TANTRUM (One Male, One Female) Subject: Relationship issues. A man and a woman have a fiery relationship.

THE FUNERAL (Two Male, One Female) Subject: Dark but light-hearted look at how best to cope with death. A couple have asked a (camp and highly unconventional) undertaker over to discuss what's available to send off the wife's now-deceased father.

PERSPECTIVES (One Male, One Female) Subject: End of a relationship - a couple have different takes on why they're breaking up.

THE LAST BUN (One Male, One Female NOW CAST ) Subject: Health in elderly people. Isa and Harry are at the breakfast table, when Isa announces it's time her husband Harry began a more nutricious diet, much to his chagrin.

FROM A WINDOW (One Female NOW CAST ) Subject: Undue curious interest in the affairs of others as a woman looks out from her window at the world below.